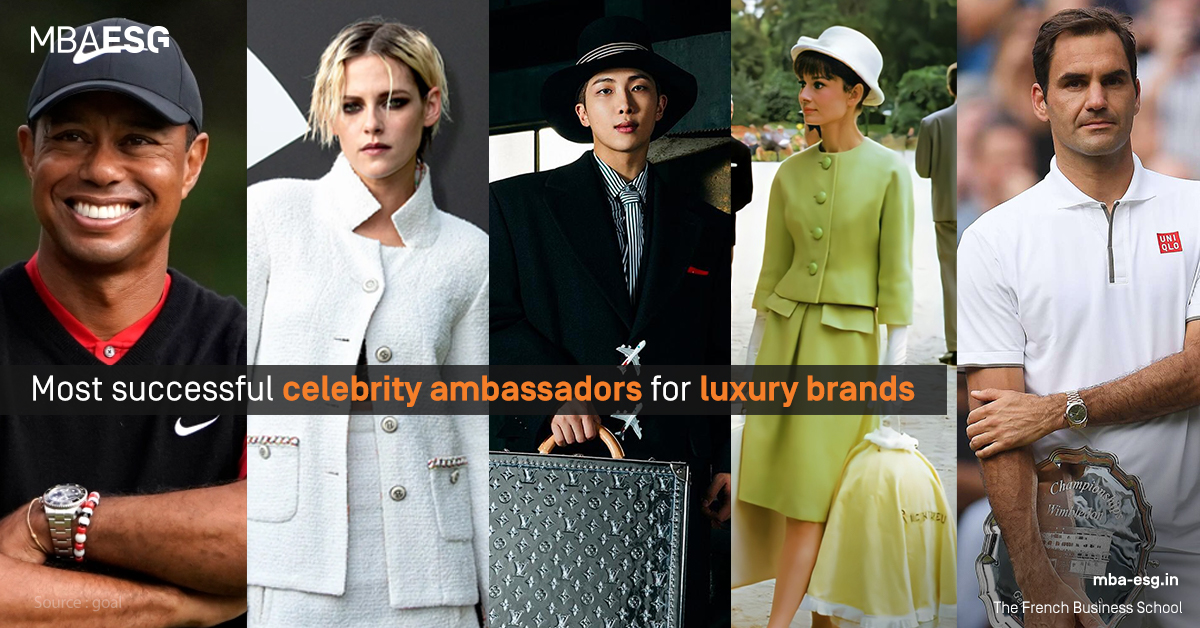 For decades now celebrities have been known to endorse luxury brands. Whether it’s a new perfume from Chanel or another editorial advertisement from Louis Vuitton, the right celebrity holds the power of influence to encourage people towards buying from luxury brands. Acting has a key ingredient of their marketing mix, these celebrities sometimes become decade long brand ambassadors and spokesperson of the luxury houses.

Affluent luxury brands use celebrities that best connect with the image of the brand. These celebrities range from movie stars to singers, globally known models, pro-athletes to leading social influencers. Here are some of the most impactful celebrity ambassadors for a few leading iconic luxury brands.

Also read: How India is empowering its Sports talent?

Roger Federer for Rolex
The legend and one of the greatest players in the sport of tennis, Roger Federer is globally one of the highest paid athletes in the world. With his winning spree towards becoming a tennis legend, he has bagged himself many tournament titles and lucrative sponsorships, one of which has been with the affluent luxury watch brand, Rolex. Federer has been a Rolex ambassador since 2011, over a decade long affair. One of the key highlights of this partnership is how after each match or a tournament win, one can always notice a Rolex watch on his wrist. Apart from the editorial adverts that come out via Rolex featuring Federer.

Tiger woods for Rolex
If there is an iconic partnership that lasted over a decade, this one sure makes the top of the list. Rolex is known to have been at the forefront of golfing long before Tiger Woods came along and became one of the brand’s ambassadors. It is also a brand that stayed with Woods over his turbulent years and stuck with him. The brand has been seen to introduce him under the ‘family of Rolex ambassadors’ – a category for Rolex wherein they choose for talent, perseverance and passion for the sport.

Keira Knightely for Chanel
Known to be one of the most iconic fashion houses, Coco Chanel partnered with the leading lady Keira Knightley for their Coco Mademoiselle Chanel fragrance. What stays iconic about this partnership is that she was just a  22 year old actress in 2007 when this partnership started and is still one of the leading ambassadors for the luxury fashion house for their makeup and fragrance range. You are bound to notice her in a number of small commercial films with Chanel which are marketed globally for promotions.

Emma Stone for Louis Vuitton
The luxury fashion house from France, Louis Vuitton, has always been known for their curated adverts and editorials. Emma Stone was signed as one of the celebrity brand ambassadors for the iconic brand of LV right after the fame of La La Land movies. She was the face of the fragrance collection Les Perfume Louis Vuitton and has been seen in multiple ads showcasing the brand’s high-end designer clothing and purses. This partnership became even more concrete and fruitful when in 2018, LV introduced Emma Stone as the new face of the brand.

John Travolta for Breitling
Best known as one of the most well-dressed celebrities in town in Hollywood, John Travolta and the Swiss watchmakers Breitling partnership is one to learn from. John is also a fully-qualified pilot who has worked with the brand in a number of campaigns to promote the Breitling watches. With 2022, the brand and John have now been celebrating eight years of him as an ambassador for Breitling by launching a brand new campaign where the movie star is seen posing in front of a Mustang P-51 plane with the new watch model.

Sharon Stone for Christian Dior
Another iconic partnership with the fashion and beauty house Dior and a woman with global fame, Sharon Stone was the talk of the town for a while. Focused to capture the skincare line of the brand and a deep focus on reaching out to the woman closer and above the 40+ age group, the luxury brand here partnered with Sharon Stone to connect with such women who will identify with her and will enjoy the benefits of taking good care of their skin.

Kristen Stweart for Chanel
Kristen has been the brand ambassador for Chanel since 2013 and has been making waves on the red carpet at many events for years now. With her recent one in 2022 for attending the Oscars in a pair of Chanel shorts. She has been long known to sport the brand at many exclusive events including the well attended Vanity Fair after party post Oscars where she wore another Chanel piece. What makes their partnership unique and well-fitted is how they both work well to challenge the norms reflecting the personalities of both the brand and Kristen.

Also Read: 10 celebrities who started their own clothing lines

The movie series of James Bond and the iconic automobile luxury brand Ashton Martin partnership has been a decade long affair. 1964 is when the Ashton Martin DB5 car debuted in the James Bond Goldfinger. The impression of this car was so impactful in the movie and engaging with the character that the partnership further continued for six more Bond films: Thunderball, GoldenEye, Tomorrow Never Dies, Casino Royale, Skyfall and Spectre. Not only making this partnership unique but also partnering with the actors over the years who have played the character of James Bond, a fine example of this is Daniel Craig for Ashton Martin.

Audrey Hepburn for LV, Givenchy, Coco Chanel and more..
Audrey is one of the most iconic fashion influencers known to this date. Her one look has been known to set trends that last to this very day as classics. She was known to be close friends with Hubert Givenchy. She was an inspiration for Givenchy to create a perfume – L’interdit. The little black dress created by Coco Chanel came to fame thanks to Audrey Hepburn wearing it everywhere, making it a must-have for every fashionista. She was also seen to have carried LV handbags at most occasions.

BTS for LV
The most iconic k-pop boy band, BTS’s partnership with LV has been a strong force of influence. Artistic director for LV, Virgul Abloh mentioned how this partnership added a modern chapter to the iconic fashion house wherein they merged luxury and contemporary culture. LV and BTS recently released a spin-off fashion film dedicated to AW 2021 menswear collection that was modeled by the globe’s biggest boy band with millions of followers.

Venturing into celebrity endorsements and ambassadorship is one way to enhance the brand’s image, build curiosity around a new launch and build a connection with your consumers. While the real success isn’t simply an outcome of appointing a celebrity but more focused on the effectiveness of the business and marketing communication strategy – that requires a thorough R&D, development of the concept, management and sustenance of the image built as a collective by both the celebrity and the brand. One must note here that while the short term results may not be measured accurately, if the campaigns are managed well, these partnerships yield long-term benefits such as increased brand loyalty and equity which help transfer to higher sales.

MBA ESG is committed to bringing excellence in the employable scenario of luxury and fashion sectors by producing management professionals who can lead these sectors and provide massive growth to the luxury brands in the country and abroad. Join our MBA in Luxury Brand Management.