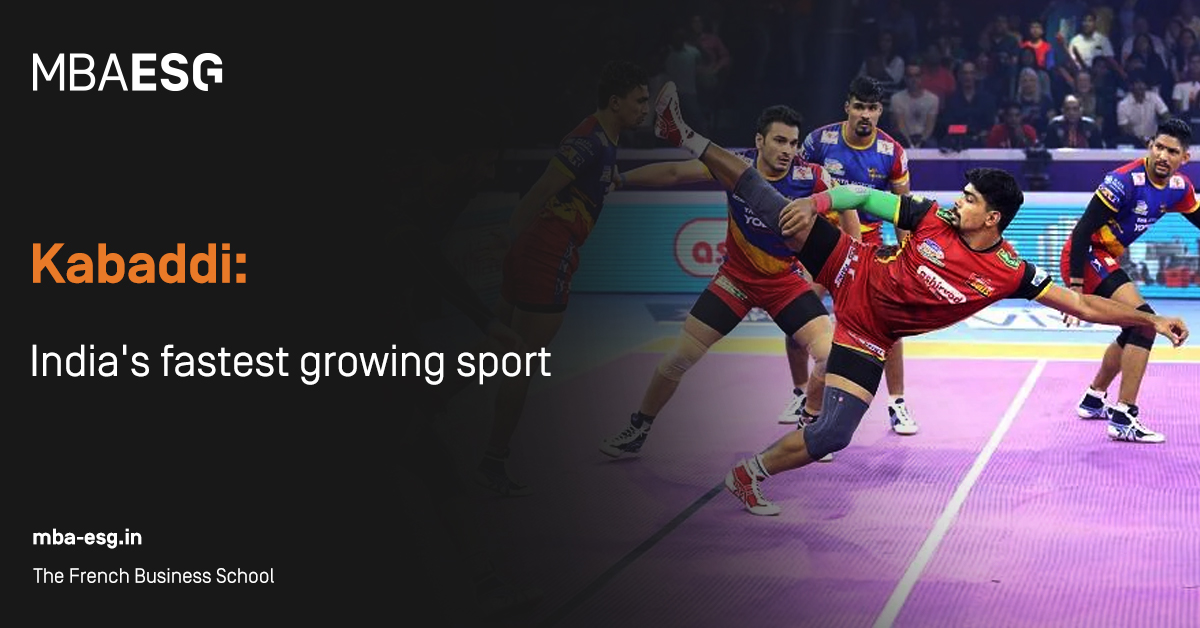 Kabaddi isn’t new to the Indian natives, it is an ancient Indian game of contact sport usually predominant in the rural regions and largely overlooked by the urban areas.

Kabaddi gained spectacular momentum in India and internationally since 2014 when the Pro Kabaddi League (PKL) was set up in India and launched nationally via the television network. PKL took a native local ancient game that was losing its shine and built a lucrative business model inspired from the Indian Premier League (IPL) focused on cricket. Kabaddi is now India’s second most watched sport after Cricket and has also inked one of the most lucrative sponsorship deals for TV rights for a non-cricket sport.

How did an ancient rural game become Global and India’s fastest growing sport?

Kabaddi 2.0
2014 launch of Pro Kabaddi League- a men’s professional kabaddi league of India gave the sport a new dimension and avatar. A new era dawned on Kabaddi. From mud to mat, local to global, PKL gave the sport a 180-degree professional twist and introduced a point system to keep the audience on their toes with excitement. The game offers these moments of excitement every 30 seconds when the playing teams conducts a raid and the other team defends.

A sport widely played and practiced in rural settings and engaging the community around it, PKL saw the opportunity to connect with the masses within the rural and metropolitan communities, further offering its advertisers a wide base of potential target audiences for marketing. The league became successful in its first launch with 43.5 crore viewers, second only to the Indian Premier League (cricket) at 55.2 crore viewers. PKL has had a steady growing viewer base since its inception, crossing the IPL and FIFA world cup viewership, some of the most popular and widely watched tournaments in sports across globe. With an increasing viewer base came lucrative sponsors and investments in the league and the sport at large. Further increasing opportunities for employment, expansion, growth and overall player salaries.

For any project to succeed it needs all its stakeholders to work in tandem towards building a working ecosystem of growth. Exponential growth for Kabaddi has been a coordinated effort of the backend people to the players, including its coaches, team managers, experienced personal setting rules of the game, wide scale marketing efforts, management teams and their implementation of strategies to much more. All of whom have been collectively responsible for the immense transformation of the league from 2014 to 2022. Not to forget, its mass audience base spread across the remotest corners of the country.

Starting with 8 teams, at present, there are 12 teams in the PKL, a league that runs on a franchise based model.

Addition of 4 new teams came in 2017-2018 as the sport grew its viewer base across the nation and internationally. The PKL saw investments from sponsors to high net worth organizations, individuals and celebrities, who also own teams in the league and have hence become ambassadors for the sport. For example, Abhishek Bachchan, an Indian celebrity actor owns Jaipur Pink Panthers, U Mumba team is owned by Unilazer ventures Pvt. Ltd. owned by Ronnie Screwvala, an influential Indian entrepreneur, Haryana Steelers team is owned by JSW Sports that is part of Jindal South West Group and UP Yoddha team is owned by the conglomerate GMR group.

The growing interest in the PKL from influential owners has kept the momentum of investment a continuous process for Kabaddi. This has also grown the career opportunities with the sport exponentially.

Since 2014, the PKL has been the one of the main reasons behind tremendous growth in the number of career opportunities growing in the sports sector and sports management within India. Players in the PKL mostly come from the rural sector and remotest areas of the country with humble backgrounds and the league being televised offers them the feeling of being heroes of the sport with a sense of recognition. Players have gone on record to say that this has been nothing short of a dream come true for them. With the big investments transforming the game and giving the players a respectful livelihood, they are committed to match the game standards of IPL and international leagues and have shown incredible transformation and evolution since 2014.

With each team in PKL there are a large number of people working in the backend to support the growth of the game and their teams. This includes job opportunities to become Team Managers, assistant team Managers, analysts, coaches, contract managers, fitness managers, facility operations manager, corporate partnerships manager/ assistants and more. When these grow there is a trickle effect on media and businesses associated with the league to also increase their staffing with sports marketers, sports journalists, business development manager/ assistant, sports lawyer, sports coordinator, travel managers and more. This also gives rise to entrepreneurs and start-up culture within the sports community with opportunities in both the virtual and offline space.

In the past few years the country has seen brands like Kabaddi Adda focusing on one game specifically and working towards becoming the trusted source of information on it to brands like Real 11, a fantasy game platform introducing fantasy cricket to fantasy kabaddi for its user base to many others, offering an understanding of the untapped potential of the sports sector.

Most of the backend teams consist of team managers and professionals who are now graduates in bachelors or masters in Sports Management, one of the fastest growing education offerings in the country.

PKL understood that Bollywood has a wide impact in the country and didn’t shy away from bringing in the big guns of Bollywood to the game since its inception. The first few seasons for PLK were star studded and aided in the promotions of the sport. A-listers of Bollywood from likes of Aamir Khan, Rana Dugubatti, Shahrukh Khan, Varun Dhawan, Hritik Roshan, Abhishek Bachchan, Sonali Bedra, Richa Chadda to Amitbah Bachchan and many more have been seen supporting various teams in the PKL as their ambassadors, owners or fans.

On the other side, PKL also caught the attention of filmmakers from across India to build storylines on the game, team, individual players and how it transformed their lives. These movies have been made in Hindi, Punjabi, Tamil and Kannada languages and their respective film industries. Badalapur Boys (Hindi), Kabaddi (Kanadda), Kabaddi – Once again (Punjabi), Okkadu (Telugu) are a few movies highlighting the ancient Indian combative sport.

Pro Kabaddi League has definitely transformed the life of Kabaddi players and given them far more options for growth, while also generating new opportunities locally and nationally. It has evolved the sport from a rural game played in mud to a league sport with an international presence, and a sport that has a bright future.